Marijuana Laws and the 2020 Election 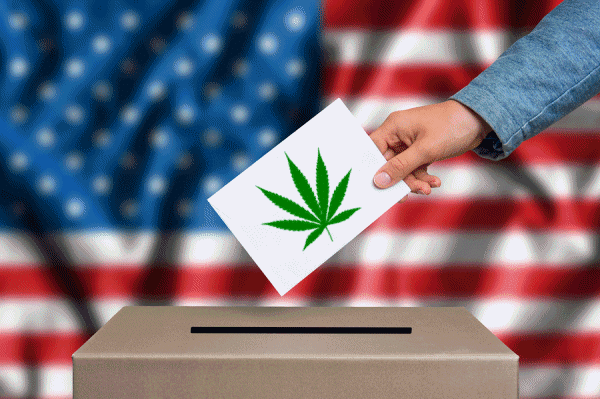 How Did the 2020 Election Impact Marijuana Laws?

Marijuana Laws and the 2020 Election

Behind all the rancor and sensationalism of the 2020 Presidency and Senate elections lies significant progress and change in the expansion of Marijuana Legalization and Drug De-Criminalization.  The 2020 Election’s impact on Marijuana Laws coupled with COVID-19 will heavily pressure other states and possibly the federal government to enact laws legalizing Marijuana.  In this post I will summarize the intersection of Marijuana Laws and the 2020 Election.

In a previous post, I mentioned the options most states or localities have in addressing Marijuana, whether it be for tax revenue, medical opportunities for citizens, or a correction to the failings and disproportionate impact of the criminal justice system.  Governments may fully legalize Marijuana for all uses, and regulation is very similar to how alcohol sales and use are regulated.  There is the option of Medicinal purposes only with a program regulating qualifications, prescribing, growing, and dispensing medical Marijuana.  Lastly, Marijuana may get Decriminalized; this does not mean it is legal, and no consequences exist for possession or open use.  Decriminalization refers to labeling possession or open use of Marijuana as a non-criminal offense and equating it to receiving a traffic ticket; you typically pay a fine.

Marijuana Laws Prior to the 2020 Election 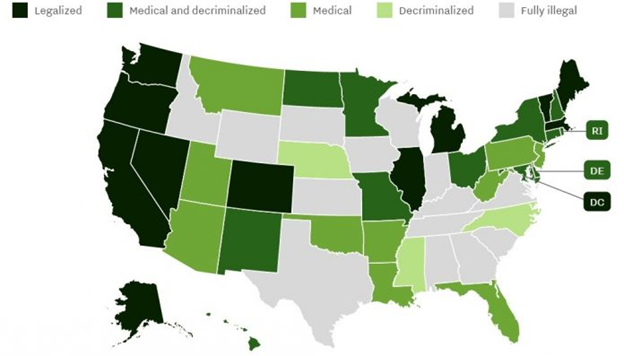 Marijuana Laws After the 2020 Election 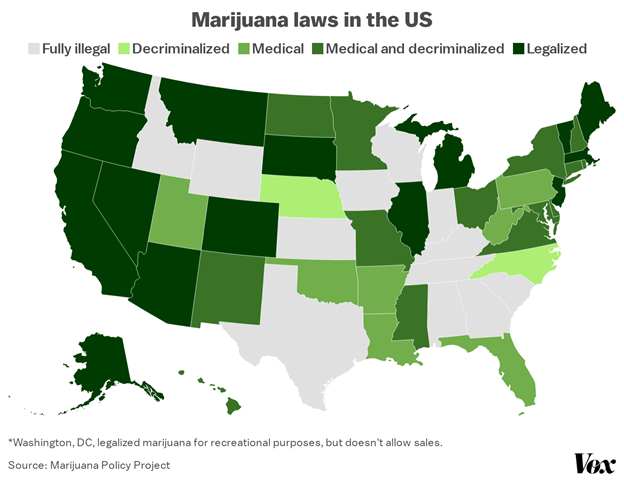 On Tuesday, the following states passed laws pertaining to Marijuana:

Arizona – Fully legalized adult use of Marijuana.  Also, it allows adults to grow up to six plants at home.

It is important to note that most of these laws do not go into effect until 2021.

Of the changes, New Jersey fully legalizing adult-use appears to be the most profound.  It places significant pressure on Pennsylvania and New York since those two states are medical use only.  With NJ being entirely legal, NJ may pull away significant medical marijuana business from PA and NY, hence tax dollars.  If one lives in the Philadelphia area, he/she may opt to drive over to NJ to purchase Marijuana for a medical condition instead of jumping through all of the hoops and challenges of obtaining a medical marijuana card in PA.  Additionally, PA and NY will see firsthand the tax benefit legalizing Marijuana will bring to New Jersey.  The threat to the medical marijuana programs coupled with the tax shortfall for state budgets in PA and NY due to COVID-19 may lead to state and local politicians currently opposed to marijuana legalization finally giving in and seeing that the positive outweighs the negative.

Personal use of Marijuana is entirely legal in Oregon; it was the first state to decriminalize Marijuana back in 1973.

On Tuesday, Oregon voters elected the passage of a law that will decriminalize all drug possession for personal use.  Known as Ballot Measure 110 and the Drug Decriminalization and Addiction Treatment Initiative, Oregon voters opted to decriminalize “hard” drugs.  Oregon’s law makes possession of any controlled substance, including heroin, cocaine, or methamphetamines, a violation punishable by paying a $100 fine and attending an addiction recovery program. It also establishes a new statewide drug-treatment system funded in part by tax revenue from marijuana sales and state prison savings.  The law also provided the state public health department two years to develop regulations and create a program responsible for manufacturing and dispensing Psilocybin to adults aged 21 or older seeking therapy with a trained facilitator for everything from post-traumatic stress disorder to nicotine dependence.  Psilocybin is in 200 species of fungi that can cause visual and auditory hallucinations and an inability to discern fantasy from reality.  Research has shown that it can reduce anxiety and stress among cancer patients and people diagnosed with post-traumatic stress disorder. Some medical use supporters also believe it is helpful for anyone seeking assistance with a persistent mental-health issue.  Washington D.C. also passed a similar law regarding Psilocybin.

The progress of marijuana legalization last Tuesday will continue as a trend across the United States and put individual states under challenging situations, as discussed.

While I see the marijuana legalization trend continuing to expand and eventually lead to the federal government legalizing marijuana for personal use, I do not believe what occurred in Oregon will take hold and other states enacting similar drug laws.  Oregon’s actions are quite extreme, and I believe the national attitude toward Marijuana is seismically different from the national attitude toward heroin, cocaine, acid, and meth.  A marijuana user’s cliched image is typically innocent and brings about laughter, whereas a heroin user’s cliched image is profoundly depressing, threatening, and unsettling.  At some point, American citizens, politicians, and medical experts will have to definitively answer the question: Is drug use and addiction a criminal activity or solely resulting from a medical illness/disease?  Oregon says yes; what will other states eventually conclude?

– Paul S. Peters III, Esquire is an attorney in Elkins Park, PA focusing on employment law, bankruptcy, criminal defense, and family law matters.  He may be reached at 215-291-2944 or ppeters@thepetersfirm.com 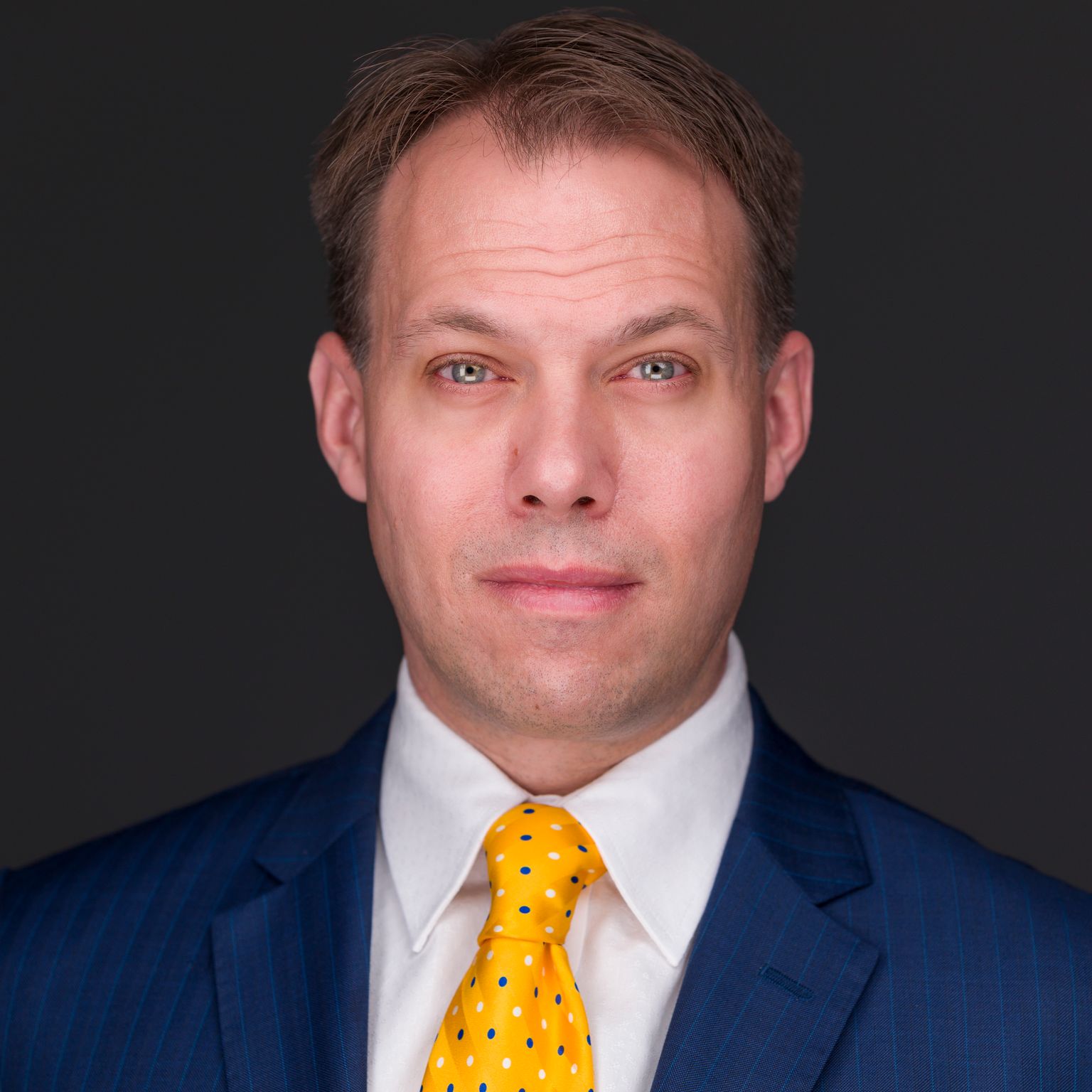