Is Marijuana Legal for Recreational Use in Pennsylvania? 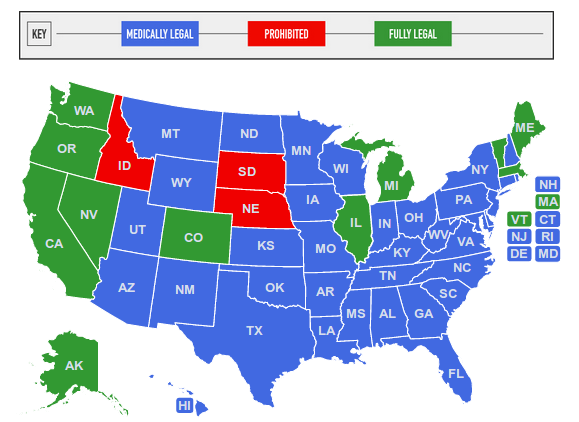 Is Marijuana Legal for Recreational Use in Pennsylvania?

Given the variety of Marijuana laws in the United States, as well as cities, townships, boroughs, and municipalities in Pennsylvania, many are asking: Is Marijuana Legal for Recreational Use in Pennsylvania?

FULL LEGALIZATION OF RECREATIONAL MARIJUANA USE

The States/Locations fully legalizing the recreational use of marijuana are:

1. Must be 21 years or older to possess and use

2. Cannot operate a motor vehicle while under the influence

3. Regulate the amount of marijuana one may possess for personal use (typically 1-2 ounces) as well as how many plants one may have in the home (typically 4-6 plants)

4. Must be purchased from a licensed and approved retailer, not off the street from the neighborhood dealer

5. It is illegal to resell marijuana you purchase legally

6. Where you consume marijuana is also regulated. You cannot openly use marijuana while walking around on public streets or in public buildings/locations

7. Even if the state legalizes marijuana, use of it on federal property within the state is illegal and you will be arrested. A good example of where this is the case is possession in airports. Having it on your person or checking in luggage is never legal

8. It cannot be possessed and/or used on school grounds or within a certain distance from a school

9. Employers can legally ban the possession or use of it at work, or being under the influence of it at work just as they can with alcohol;

10. If you purchase marijuana in a legalized state, you cannot transport and use it in a state where it is not legal

11. Just as cigarettes and alcohol are taxed at a higher rate, marijuana is taxed at a much higher rate than other consumer goods. Some states have put laws in place requiring all tax revenue from the sale of marijuana to only be used for the state and local public school systems

DECRIMINALIZATION OF MARIJUANA, BUT NOT FULLY LEGALIZED

Decriminalization means that certain states/locations that have not fully legalized the recreational use and possession of marijuana, have changed their laws to treat it similarly to a traffic ticket. These states and localities have changed their drug laws pertaining to marijuana as follows:

1. No formal arrest for possession of a small amount of marijuana

2. No threat of prison time for possession of a small amount of marijuana

3. No criminal record for possession of a small amount of marijuana

If you possess or use a small amount of marijuana you are given a citation with a fine and maybe community service; you are not put in handcuffs, arrested, or processed at the police station.

Some states that have decriminalized marijuana are:

Is Marijuana Legal for Recreational Use in Pennsylvania? NO!

In Pennsylvania, the following cities/counties/municipalities have decriminalized marijuana:

It is important to point out that even in areas where marijuana has not been legalized or decriminalized a first-time offense will most likely result in entry to a diversion and treatment program. Examples are Accelerated Rehabilitative Disposition (ARD), Drug Court, or Section 17. If you successfully complete the program, the case is dismissed, no jail time will be served, no criminal conviction will result, and you may have the arrest expunged from your record.

The diversion programs may require things such as: (1) three months to 2 years supervision by the court; (2) payment of fines; (3) completion of community service; (4) mandatory drug and alcohol safety classes; (5) drug treatment; (6) no additional arrests; (7) employment; and (8) no positive drug tests. The diversion and treatment programs are not guaranteed and your entry and acceptance into them are completely at the discretion of the local prosecutor’s office, or judge handling your case.

The United States is obviously all over the place when it comes to medical and recreational marijuana use and possession. Therefore, if you are a person that engages in the personal use of marijuana you must ensure that you understand it is always illegal per federal law and on any federal property. You must learn and understand the laws of the state you are in, as well as the city/municipality/county you are in. Never, never, never, make assumptions or trust the word of your buddy, as you may end up with an arrest, prison time, and criminal record for simply possessing or smoking a joint. So, before traveling around the US with plans to recreationally use marijuana, know the local laws before you end up in a situation that does not play out the way you planned.

If you ever find yourself on the wrong side of the law due to possession or use of marijuana, remember to remain silent, give no statements and make no admissions, act professionally and cooperatively with law enforcement, and immediately contact a trusted attorney experienced in defending individuals in drug matters, such Paul S. Peters III, Esquire.